The cornerstone of emotional toxicity is the Pain Body, which prevents you from experiencing peace and connection at an emotional and spiritual level as well as vitality and health at a physical and cellular level. The Pain Body can be seen as its own energy field within the Cellular Memory whose prime directive is the accumulation and generation of pain in your life. Whether disease, dysfunction, imbalance or lack of peace occurs at any level, you can be sure that the Pain Body is playing a very active role in feeding its existence. Eckhart Tolle, author of The Power of Now, calls the cumulative layers of NEC the “Pain-Body” and refers to it as an entity. He says: 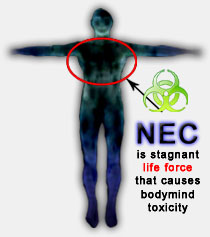 “There are two levels of pain: the pain that you create now, and the pain of the past that still lives on in your mind and body. This of course includes the pain that you suffer as a child, caused by the unconsciousness of the world into which you were born. The accumulated pain is a negative energy field that occupies your body and mind. If you look at it as an invisible entity in its own right, you are getting quite close to the truth – It’s the emotional Pain-Body.”
The cells in which past physical or emotional trauma is stored, operate in a survival pattern based on something that is no longer real or current for anyone but the person maintaining the pattern. When an unresolved issue or trauma impedes the flow of energy in the body-mind system, stagnation is created in a particular part of the body, often the organ, joint or muscle most associated with the trauma. We know further that areas of stagnant energy contain negative e-motional charge (NEC) that literally split and subdivide the human energy field in separate compartments without communication between them. When we hold off the trauma, we are allowing more layers of NEC to follow the original one making the situation even more complex. A simple example: You hurt your ankle while running because you are late to your office. You feel very upset for that. You get angry at yourself for not paying more attention when walking and you may blame yourself by saying things like, “Stupid, you never pay enough attention!” “You are going to be late and your boss will be upset with you”. By now, your body is not only feeling the physical trauma in the form of real pain, but you are adding self-condemnation, anger, guilt, fear and unforgiveness. This process may go on and on. 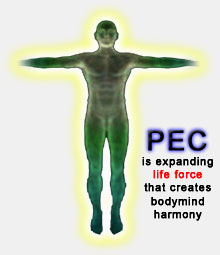 Acupuncturist, Tapas Fleming writes in her book You Can Heal Now: “…at the moment when a problem or a trauma happens, (physical, mental or emotional) we have the feeling that life is unbearable and we say ‘NO’ to whatever is happening to us. Some variations to this theme include: ‘this is too much for me; if this happens, I won’t survive.’ The implication to that inner statement is, ‘I’ll deal with it later, file it away, I’ll face it when I can, when it is not life threatening’.
But we seem to put off forever something that we don’t want to deal with now, and the imbalance of the undigested trauma stays with us. We can put time and distance between us and the event, but the experience itself is still on hold. Another response may be to deny that the problem happened. However the more we keep it locked in the ‘so called Past’, the more strongly we are connected with it. The more unresolved issues we hold off, the more narrow and limited our lives will become.” Unprocessed traumatic experiences create suffocation and contraction of the positive e-motional charge (PEC) which leads to massive dysfunction in our bodies-mind system. The disproportion between positive and negative e-motional charge (Pain-Body) is such that the natural bodily activities are deeply affected. Just think for a moment, the amount of Life force that it has taken to “hold” that NEC stored in the cells all this time! Now imagine for a while how you would feel releasing that NEC, allowing the transformation to take place. When we use this technology, we do not erase the memory. The stuck Life force is liberated, leaving the cells’ natural energy free to be used for self-healing and growth. Since very young, we learned to resist our feelings, damaging ourselves physically, mentally and emotionally. We did this because we didn’t know what we were doing and because we imitated others (ancestors, parents, teachers, TV programs, publicity, books, etc.) When we disregard a feeling, we are resisting its existence and trying to exchange it for something that matches our self-image. When we resist “what is” and the existence of present feelings, we cannot digest the experience. This is how the NEC is stored in the body-mind organism creating the Pain-Body.

What supports the Pain-Body is “unconsciousness” 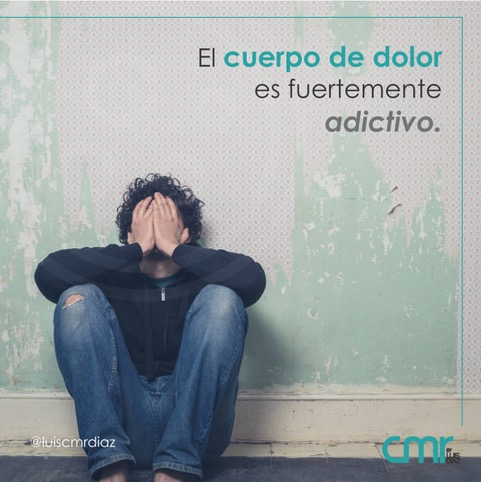 The Pain-Body is an inner energy field, almost a “separate entity”, with its own agenda. This is an energy field of negative beliefs. And the negative decisions that we make about our life and ourselves, may affect our reactions when a certain button is pushed.” Sometimes the stimuli are “nonsense” and other people don’t understand our dramatic overreaction. This creates more negativity in our thoughts and perceptions, attracting more uncomfortable circumstances into our experience.

The Pain-Body is very big in our civilization; it is everywhere–books, movies, television–wherever we go, we see its expression. These are expressions of resistance, of anger, envy, oppression, resentment, fear, guilt, shame and all other forms of negativity. It is friction that was never resolved in our system, friction that was never observed, allowed and transformed, but rather stored and put on hold. When we go through a negative experience, usually we make a decision such as, “I’m not good enough,” or “I won’t be able to make it”; ” I’m dumb”, or “this is too much for me”. When we believe in those decisions, they get imprinted in our energy field and they run our life from then on. Most of those decisions were made at a formative age, or were absorbed from our mother’s energy field in the womb.

The main reason that we don’t want to deal with the Pain-Body is because we don’t know how. In addition, we don’t know how because we never knew of its existence. We were not aware of it! The Pain-Body is the accumulation in us of all the negative experiences we have had, all the resistance, all the complaints. Most of it is unnecessary suffering. Unconsciously we get used to a way of perceiving life that causes us suffering. It is because of ignorance and imitation. We don’t know what we are doing to ourselves. 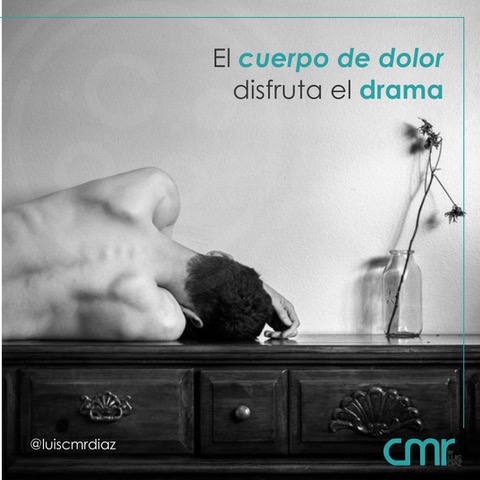 The Pain-Body can be released when we transform the stagnant NEC in our system. We digest NEC when we fully acknowledge and allow our feelings, without reactivity, and without judging ourselves, for the way we feel. While practicing this work, you will be consciously visiting your energy field, perhaps for the first time in your life. You will be bringing awareness to your mental and emotional reality. It is not the expression of the emotions that is relevant, it is owning them, being present to them. Not because they are “your” emotions, but because they are happening in you “now”. And when you accept fully what is happening in the now, it passes through you; it doesn’t get stuck.

The Pain Body Release technique helps you to detect and transform the pain body. It is a practical and effective tool, and it is easy to learn for yourself. Once we have diffused the pain body, we have to “repattern” the belief system that is supporting the creation and recycling of the pain body. This process is crucial to gaining total awareness of the origin and roots of a painful pattern. Without transforming the beliefs behind the pain body, we are only masking the pain and putting a band-aid on it.
The repatterning process brings balance to our neural net. Click here to learn more about the neural net and how it stores and processes our belief system.